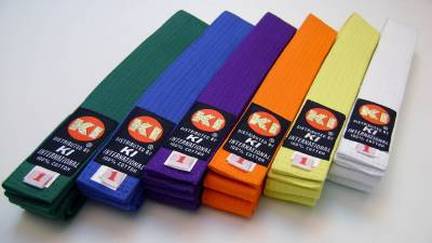 Shodan Ho (Junior Black belt student cannot promote to Senior Shodan until the age of 16. There are certain exceptions to this rule and in those cases it will be decided by Sensei Aguilar and Shihan Acosta.) This is considered a probationary black belt ranking.

The dan (段 dan) ranking system is a Japanese mark of level. As a ranking system, it was originally used at a Go school in the Edo period. It is now also used in modern fine arts and martial arts. The system was applied to martial arts by Kanō Jigorō (1860–1938), the founder of judo, in 1883, and later introduced to other East Asia countries. The word dan (段) literally means "step" (of the stairs) or "stage".

In the modern Japanese martial arts, holders of dan ranks often wear a black belt, those of higher rank may also wear red-and-white and red belts.

The character of Dan (段 dan) is used in Japanese to mean step or grade, and is commonly equated with a degree. However, the origin of the Chinese character, spelled duàn in Pinyin, was used to mean "phase". Dan rank is often used along with the lower rank system, Kyū (級 Kyū) rank.

The Kazokukan Dojo follows Jigaro Kano Sensei's Dan system. At the Kazokukan you learn reality and practicality from day one coupled at the black belt level with the knowledge of other forms of Okinawan Karate Kempo, Aiki-Jujutsu Te and Polynesian Martial Arts. We aim to develop ourselves on more than just a physical level but on a personal, mental, spiritual one.
Copyright@Japan Martial Arts Association of New York, New York non-profit corporation and federally tax exempt organization under IRS 501(c)(3). All rights reserved.